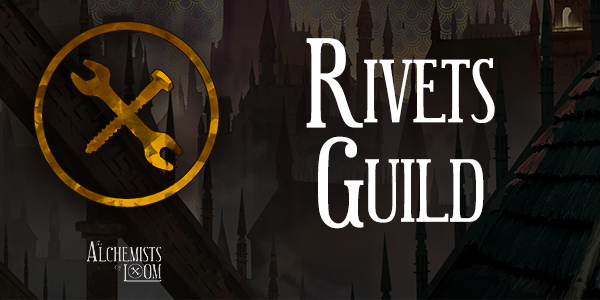 A Brief History of the Rivets Guild

Number of Vicars to Date: 25

Description of Guild Hall: Wedged between the spiraling smokestacks of refineries and din of factories is the great clockwork experiment that the Rivets Guild makes their home within. Known for it’s moving pieces and continually shifting appearance, there is never one set way to enter the guild. Instead, Rivets are challenged from their first days as initiates to mentally recreate the schematics the hall was built from, using the bronze and steel gears, cogs, tunnels and tubes that surround them to find their own pathway into the ticking heart of innovation. It is said that there are mechanisms so old, and mechanics buried so deep, that parts of the guild hall have been lost to time as every member of the guild, initiate to Vicar, make their mark by tightening their own bolt in the constantly evolving structure.

A Brief History: As the early Harvesters pushed into the forests that seemed like low hanging fruit, connected by land to the north, a small group headed south, instead. They roamed the coastline, setting up small fishing villages and creating skiffs by which to venture out into the shallow waters of inlets and bays for better fishing. The seas had great bounties to give from plentiful fish to the resource of salt.

Shanty towns evolved into thriving, albeit small, cities. Ter.1.4 became known as “the city at the end of the world” for it appeared to be at the very end of the land that the Harvesters had made their home. But, one day, a fisherman returned from the waves, reporting sightings of land.

Ever in search of new things to reap, the Harvesters explored this and discovered that, in fact, there was land across the sea. But attempting to reach it proved folly.

The waters in the narrow straight between Ter.1 and what is now known as Ter.3 are treacherous with hidden rocks and are regularly riddled with vicious currents and tempests to match. Furthermore, as they tried to swing wide to the south, the Harvesters discovered a new breed of fish, one their harpoons were useless against — they discovered that the southern seas were riddled with sea monsters.

When most pushed the matter aside, a man named Garre continued to toil over the idea of taking to the waves. Not for a short journey, or a small fishing trip, but a greater excursion that would unveil this new land. He theorized that the sea monsters which plagued the southern waters were, too, kept out by those same rocks and tempests. That, by charting a course in a more northern direction, he could reach the land in a different way — if there was truly land to be accessed at all.

Garre’s vision became his mission. While others went to the fields to work, the forests to scavenge, the tunnels to dig, or the seas to fish, he began to work on a vessel that would be strong enough to withstand the journey. The man became obsessed, pouring himself into every way to approach the rigging and design the vessel. He began to study metallurgy, working on the first simplistic refining processes that would yield bronze and steel.

While most the town ostracized him, a few saw his passion, and joined him on his quest. They assisted in designing the ideal ship, no detail overlooked. When the journey was made, the vessel held together, barely, making landfall on the peninsula that is now the city of Garre. They journeymen became so obsessed with the minute details of the vessel which took them across the sea that the once-Harvesters no longer cared to scour the land for resources. They were, instead, too focused on exploring this new science of small machines that could make large feats possible known as clockwork.