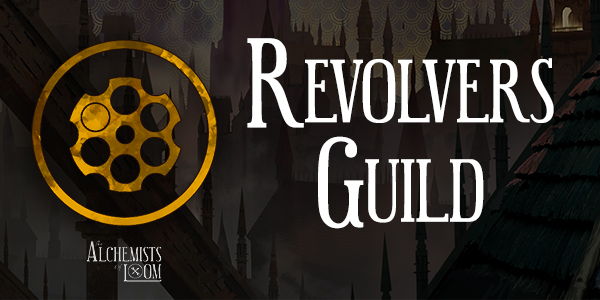 A Brief History of the Revolvers Guild

Number of Vicars to Date: 21

Description of Guild Hall: Nestled in the mountains of Territory 5, the Revolvers Guild hall takes after the guild’s symbol the most literally. Six towers, arranged around the city in a circular fashion are connected by arched walkways and funnel to a center point. Carefully planned with the help of the Rivets, the guild hall offers six clear entry points, a testament to how integrated the guild is with the city around it. The architecture on the outside was created with a careful facade. While each tower looks no different than any other building in the city to the naked eye, they have been carefully reinforced with layers of metal and concrete, hopefully protecting the city dwellers from any experiments gone awry.

A Brief History: Compared to the other guilds on Loom, the Revolvers Guild was far and away the most strategically planned. Founded only 469 years before current day, the guild is the fifth and final (according to most experts) on Loom.

A vast mountain range arcs up to the right of Ter.3, forming a curved peninsula that’s almost entirely enclosed in snow-capped peaks. Due to the hostile environment, this was the last place the Ravens fully charted. It took them one-hundred years to map the rest of the world, but merely pushing into what would become Ter.5 was almost fifty years unto itself.

They found themselves unable to penetrate the remaining land via the mountains, so the Ravens charted a course by sea, landing in the only seemingly viable patch of flat land exactly opposite their port city of Ter.4.2. But the towering sentries of sheer stone and granite cliffs continued to bar them entry. Undeterred, Dortam, the leader of the expedition, called for sticks of gunpowder from the Harvesters. They had been using the relatively new concoction to deepen their mines and he sought to blast a path into the heart of this new plot of land.

During his exploration, Dortam became obsessed with the explosive material. He brought it back to the Ravens Guild hall following his explorations and took it to the Underground beneath, the “Ravens Folly” to deepen the ever-expanding tunnels and tracks that had begun to stretch underneath the whole of the continent. When Dortam became lost in the Underground, attacked by the monsters that had made it their home, he turned to the gunpowder he had been relying on for years.

Dortam blew his way out of the Underground, and blew his deadly foes to pieces. Recognizing the full destructive power that Loom was heading toward, he headed toward the Vicar Tribunal on Ter.0 and petitioned to form a fifth guild in the mountains, far from any other guild, to experiment with these new tools of destruction. His request was granted and the other guilds pooled together to help build Dortam, a city that was founded on the idea of crafting tools of death in the most responsible way possible. Dortam named his guild after the first weapon he created — the humble revolver. And he emphasized that while explosions were an unparalleled delight, every Revolver had a duty to understand the responsibility that came with creating, and wielding, such great tools of death.