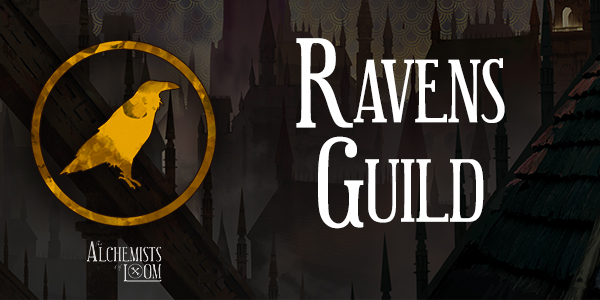 A Brief History of the Ravens Guild

Number of Vicars to Date: 29

Description of Guild Hall: The Rivets guild is not the only moving guild hall on Loom. Located in the center of Ter.4 and, in many ways, the center of the world, the Ravens Guild hall functions as the main hub for all manner of vehicles. Experimental trikes and bikes race around the helix rings of the hall. The main train terminal of Holx is situated at the very bottom of the guild, with other roads weaving in and out. Overall, the guild hall resembles a series of stations, floating platforms, and pit stops, than a conventional structure found in the more southern regions of the world. But what makes the guild truly magnificent, is not what is above ground… but what lies in the darkness underneath in the endless tunnels known as “The Raven’s Playground”…

A Brief History: After the establishment of the Rivets Guild, Loom went through a period of growth and development that expanded the mind before the territories. With the tools developed by the Rivets and medicines crafted by the Alchemists, the Harvesters could dig deeper and more efficiently. Which, in turn, gave the Rivets and Alchemists access to new materials and resources.

During the hundred years following the formation of the Rivets Guild was the birth of bronze and steel. The first steel mills began to pop up in both Ter.3 and Ter.1 to service the needs of the respective land masses. Engineers began to consider steam and how it could be more effectively used to not only create, but transport raw materials and finished goods.

The Rivets looked at the matter from a purely practical necessity of finding the most effective means of transport. But, a few young bolts took the matter too far. Rather than becoming enamored purely with the mechanics surrounding the idea of a steam engine, they found joy in the thrill of the ride. The group became focused on how they could build faster machines that would take them further and show them every corner of the world.

The mentality was discouraged by the guild as wasteful in both time and resources. Their projects were tolerated only until an accident involving a “rail-less” vehicle resulted in the death of several guild members and loss of resources. Shunned for disrupting the guild’s status quo and upsetting the harmony, the group was cast out of the hall.

They ventured into the great unknown, wandering over the rolling hills to the north and into the flat grasslands of what would become Ter.4. There, they saw an opportunity to experiment freely without risking anyone’s lives but their own in their pursuit of speed. In these perpetually moving camps, Holx was born. The ingenuity of a Rivet met the freedom of what would become the first Raven, in him.

Holx rose to give structure to the rogue bike groups, turning them into a Guild and organizing them around their skills. He repaired relationships with the Rivets and the rest of the world, offering his plans for a new rail system to move supplies more effectively than ever before as a gift of good will. He oversaw the construction of the first main rail lines connecting the territories and established regular ferries between Ter.1 and Ter.3.

He earned his moniker “The Raven” due to his coal-colored skin, eyes, and hair. By the time the guild hall was built in Holx, the city named after him, the name stuck for all its members, those seeking to live like their founder — wild, free, daring, and driven by the desire to apply technology to meet the farthest unknown horizon.