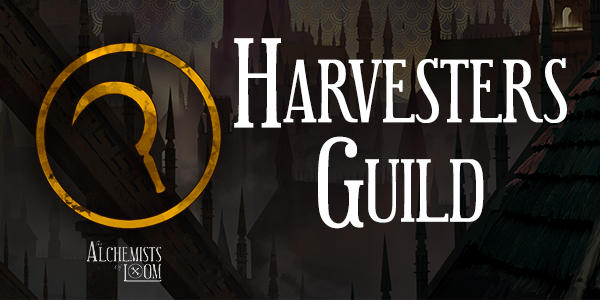 A Brief History of the Harvesters Guild

Number of Vicars to Date: 32

Description of Guild Hall: Towering and ancient, the guild hall of the Harvesters Guild is the oldest on Loom. A single-column structure, it grew tall from the earth being slowly carved away around it for hundreds of years. Today, the mines surrounding it are twice the depth of the tower itself, extending into the earth for an immeasurable distance. As the mines grew, the usable space in the guild hall expanded downward with them. To the casual observer, the guild appears to be a giant stalagmite, reaching up to the impenetrable clouds of Loom. However, to a knowledgeable Harvester, the guild is an endless maze of dark tunnels and workmens’ passages.

A Brief History: The Harvesters Guild was founded of necessity. From the beginning of civilization there was a need to acquire resources to sustain life. Over the years, it became obvious that pooling together manpower was the most effective means to efficiently collect resources in greater quantities. This resulted in towns being formed, and stabilization of people into organized structure. The greatest town among them became the original home of the Harvesters Guild.

Early Fenthri realized logical order was the key to success. So they began to structure their lives around fundamental laws they discovered about, or created within, the world. Early Harvesters possessed the traits of all the Guilds out of necessity, and, thus, all guilds can ultimately trace back their roots to them.

The Harvesters Guild, structured under the first Vicar, marks the beginning of counted time. Though the shifting light patterns of the clouds above, Vicar Faroe worked out a calendar of twenty months based on cycles of fading and brightening light at night, punctuated by a day of full light at the end of every twentieth month. While the reason for the shifting light was then unknown, it served as the start of a system for their agrarian society.

As Loom expanded, so did the Harvesters. Farming was no longer enough. Then came the necessity of acquiring minerals and ore for the creation of bronze and steel with the assistance of the Rivets. And, when Nova was discovered, the Harvesters’ expertise expanded again at the Alchemists’ behest for reagents to create mass organ farms  harvested from live Dragons.

Since the early days of Loom, the Harvesters Guild has sat as the cornerstone of society, and without their collection of resources, the great cogs of the world would grind to a screeching halt…