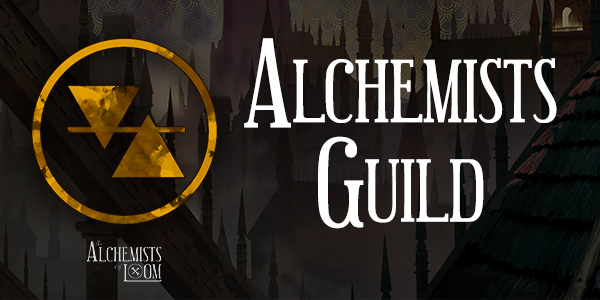 A Brief History of the Alchemists Guild

Number of Vicars to Date: 33

Description of Guild Hall: Situated just outside the city of Keel, named in honor of the first founder of the guild, the Alchemists’ Guild hall stretches tall against the towering trees of the Skeleton Forest. The hall itself was designed to stand against the terrors of the dark forest with a thick outer wall and flat roof, by which gunners can position themselves to guard the guild’s only entrance. The tower thins into two tiers as it rises for stability against the wind. These flattened rooftops also serve as other vantages to see any who dare approach the most secretive guild in all of Loom. Within, lifts that stretch the entire length of the tower via a central atrium are used to access the hallways that circle the guild at every level.

A Brief History: The original Harvesters ventured northward into the dense forests in search of new types of flora and fauna. However, as the trees grew taller and the path more foreboding, they quickly found themselves prey to the deadly endwig that haunt what is now known as the Skeleton Forest. A foraging party, lead by Keel, was pushed deeper into the forest in flight of the monsters, separated from their group and far from the path.

That party of fifty-two Harvesters were lost, alone, and wounded in hostile lands. They knew nothing more than the observations they’d made of the terrain. Their experience upon the flat plains and marshy deltas of Ter.1 served them little in the following weeks. As wounds festered and food diminished to nothing, their leader, Keel, decided a new sort of thinking was necessary to their survival.

It was Keel who performed the first skin graft, slicing away the rotting skin and tissue around the wounds of the stronger members and replacing it with healthier flesh from those who had just died. In paying attention, Keel noticed that certain plants they ate with desperation had effects other than sustenance, such as fever reduction. So, Keel produced the first medicine of Loom.

And, it was Keel who developed a new sort of harvesting — the harvesting of meat from their once-living comrades for the sake of survival.

The group was reduced to thirty-seven, but they survived the winter. By the time the snows thawed, they had lost interest in heading southward once more. The group had changed, their ideals and vision were not what they once were. The very things that drove them were altered.

They remained in what is now Keel, studying the land and pushing the boundaries of medicine, chemistry, and biology with the same zeal they found that winter. When they finally regained contact with the Harvesters years later they no longer addressed their former guild as their own.

They were Alchemists. Their knowledge had been earned in blood, and they would not give it up easily.