Post all blogs and social media relating to the cover reveal on Monday the 24th!

(Secondary posts after are always welcome ~_^)

If you’ve been directed to this page it’s because I would love to have you share the cover reveal for book two of Air Awakens, Fire Falling, on your blog and social channels! Should you have any questions please contact me via Elise.Kova.Author@gmail.com

Because this cover reveal is happening BEFORE the release of book one, Air Awakens, there are some spoiler sensitive things on this page. Fire Falling continues the story of Vhalla Yarl directly following the events of Air Awakens so some of this is relevant to how the first book ends. Notably, the synopsis could be a spoiler. I’ll leave this for you to decide how much you want to share.

My goal for the Fire Falling cover reveal is to help drive preorders to Air Awakens book one and the series in general.

The artist for the Air Awakens covers is zwxArt, for linking and any who ask!

Vhalla Yarl marches to war as property of the Solaris Empire. The Emperor counts on her to bring victory, the Senate counts on her death, and the only thing Vhalla can count on is the fight of her life. As she grapples with the ghosts of her past, new challenges in the present threaten to shatter the remnants of her fragile sanity. Will she maintain her humanity? Or will she truly become the Empire’s monster?

Don’t forget to mention/tag me on your social posts so I can reshare them:

Elise Kova has always had a passion for storytelling. She wrote her first novella, a high-fantasy, in sixth grade. Over the years she’s honed her love of literature with everything from fantasy to romance, science fiction to mystery, and whatever else catches her eye.

Elise lives in Saint Petersburg, Florida, where she’s currently working on the next installment in her debut YA fantasy series: Air Awakens. She enjoys video games, anime, table-top role playing games, and many other forms of “geekdom.” She loves talking with fans on Twitter (@EliseKova) and Facebook. Visit her website, EliseKova.com, for news and extras about her books!

There have been issues with copying and pasting the embed code off my site. I don’t know why. Click the link above to get the Rafflecopter code from their site. 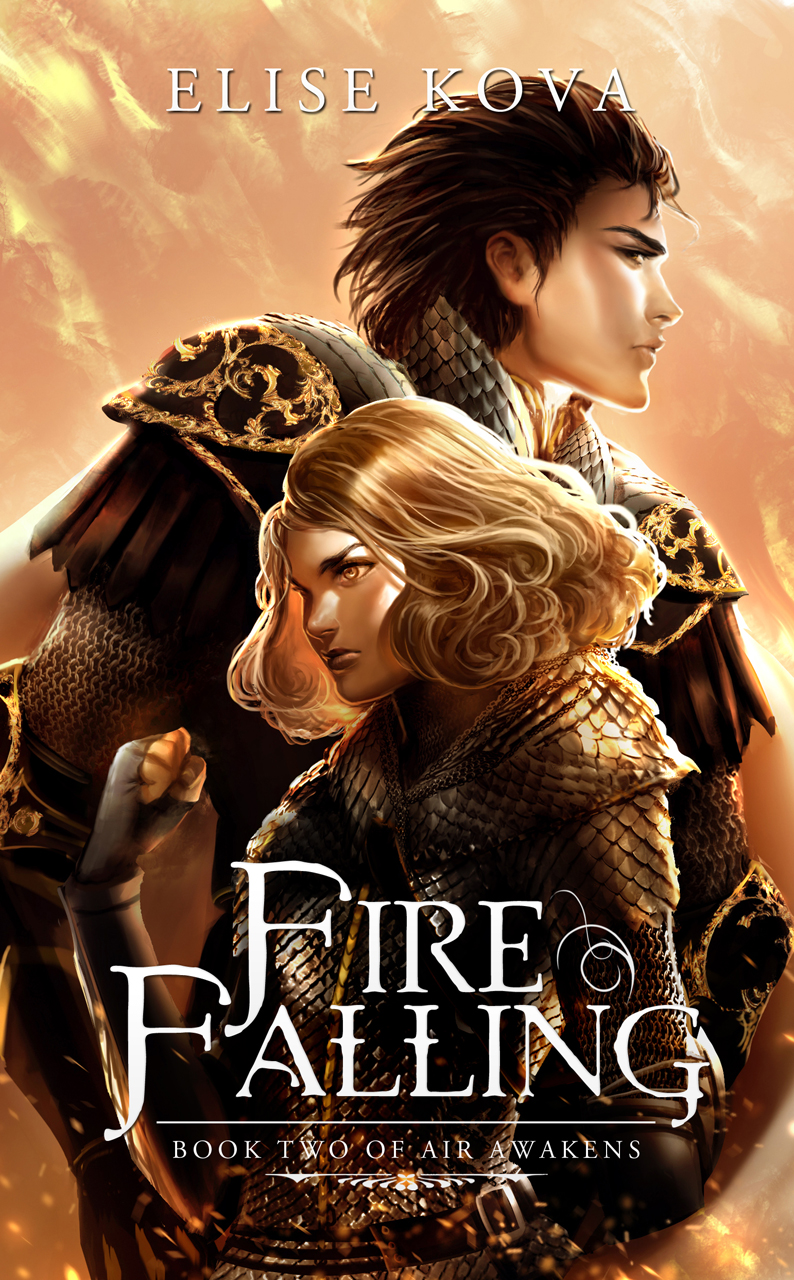 You can use the following code to embed this image into your blog via html:

Please consider linking my social channels to your post so that your readers know how to find me and I can be sure to like/share. You can use any of the following images on your social channels or website for the purposes of promoting Fire Falling: 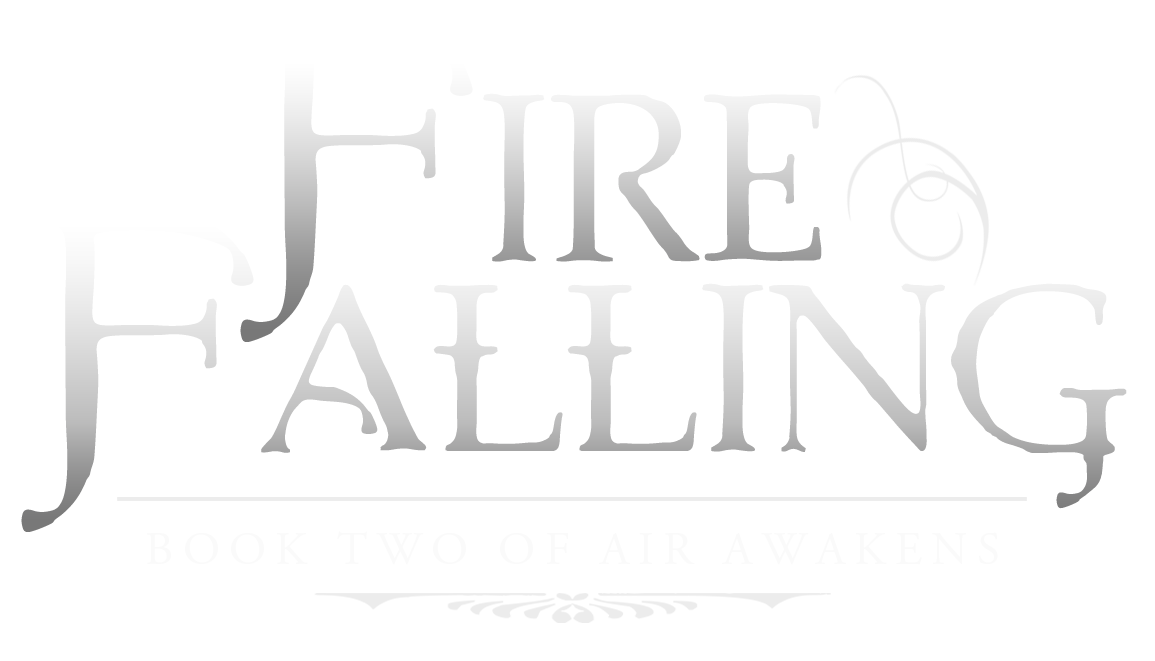 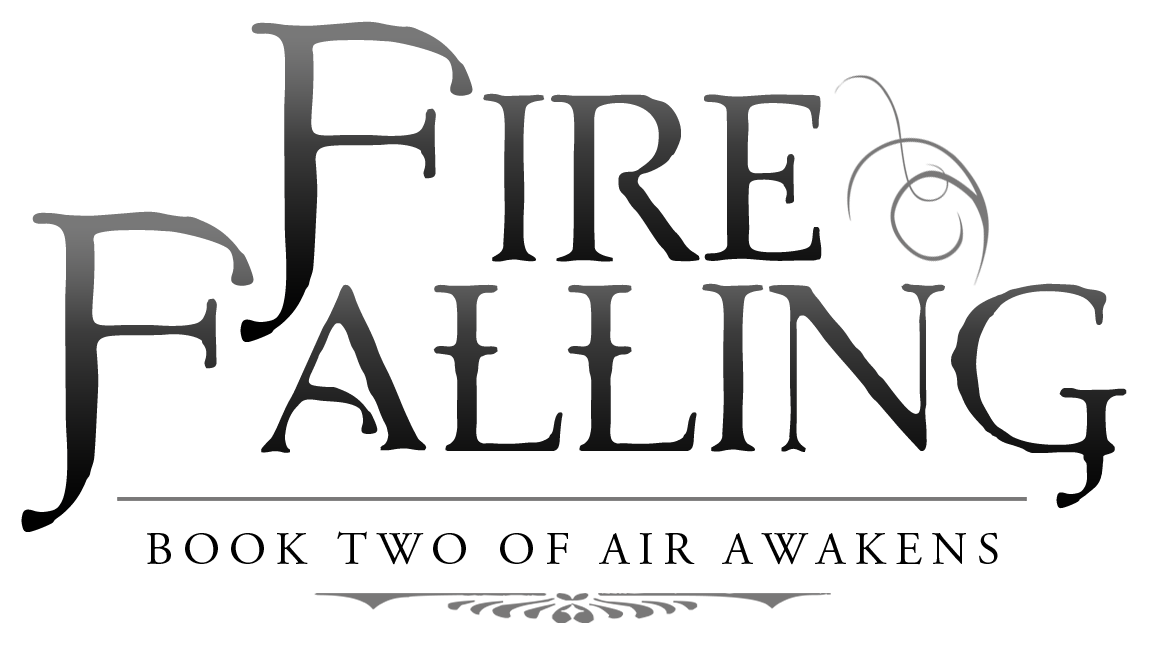 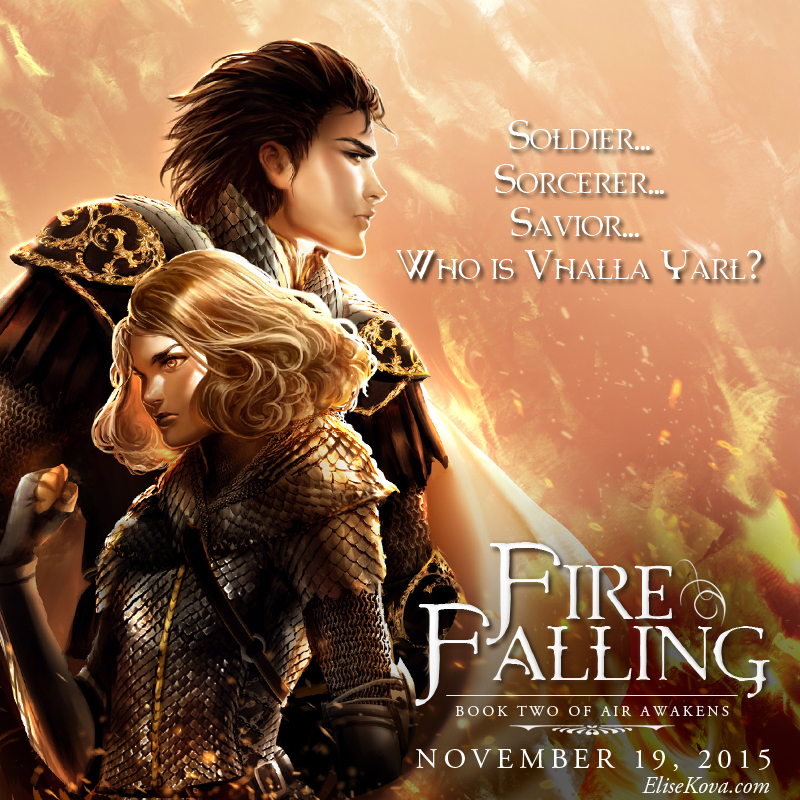 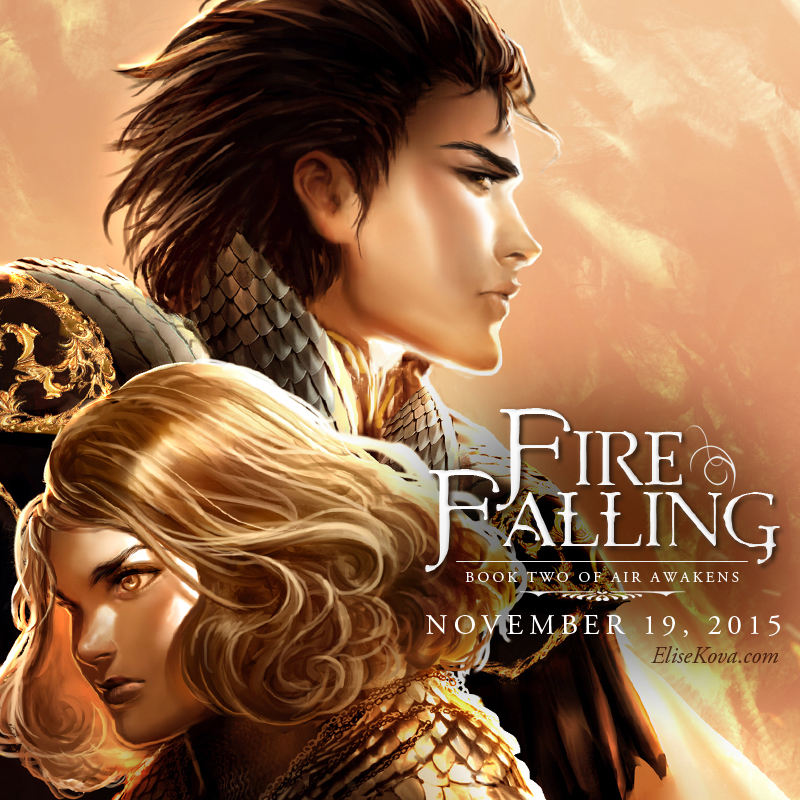 For the Fire Falling cover reveal I’ve prepared the following character bios that you can pick from and share on your site. My idea is that every reviewer can pick the character they think sounds the most interesting and share that character – so there will be a mix of characters on blogs. As an idea, you can share with your readers why you like and chose a specific character. You can use as many as these bios as you’d like, or none of them! Whatever you think works best for your blog.

Air Awakens Age: 17-18
Height: 160cm (5′ 3″)
Birthday: Late Summer (Time of the Mother)
Born in: The East (Leoul, Cyven)
Eye Color: Brown, flecked with gold
Hair Color: Ashen Brown
Skin Color: Yellow-tinted tan, golden skinned
Build: Thin boned, small framed
Favorite Food: Lemon Cakes
Affinity: Windwalker
Personality: Curious, Kind, Determined, Inquisitive
Childhood: Vhalla was born in a small farming town in Leoul, located in the western portion of Cyven (otherwise called the “East”). Her father was a farmer and her mother was the daughter of the postmasters of Hastan (the Eastern Capital). Vhalla’s upbringing was balanced between helping (more like playing in the mud) in the fields where her family grew wheat and receiving a modest education from her mother. When Vhalla was eight her father enlisted as a soldier during the War of the Crystal Caverns, during which time her and her mother fell ill with Autumn Fever. Vhalla overcame the illness, but her mother did not and she died when Vhalla was ten. Her father returned home, the war won, shortly after and relieved their neighbors of the young Vhalla’s care. For her father’s service he was awarded a place in the palace guard in the Southern Capital of the Empire. He took his daughter to the Emperor and asked to trade his place in the guard for an opportunity for Vhalla to work in the palace as an apprentice.

Vhalla was eleven when she began studying under the Master of the Imperial Library, Master Mohned. Shortly after she joined the library staff another girl, Roan, joined as well. Fast friends, the children were eager to welcome the addition of another into their fold when Sareem, a boy about the same age, arrived. The three were mostly diligent to their duties but got into trouble from time to time. Sareem was often the instigator, dragging along a reluctant but willing Vhalla. Roan attempted to be the voice of reason, but to no avail.

Air Awakens Age: 24
Height: 188cm (6′ 2″)
Birthday: Late Winter (Time of the Father)
Born in: The West (Norin, Mhashan)
Eye Color: Black
Hair Color: Black
Skin Color: Pale, gray toned
Build: Lean, narrow hipped
Favorite Food: Candied Lemon Peels
Affinity: Firebearer
Personality: Withdrawn, Witty, Stubborn, Intellectual, Short-Tempered
Childhood: Aldrik’s mother was the youngest of four children in the ruling family of old Mhashan (the West). When the Emperor conquered Mhashan he took Aldrik’s mother for a bride and she was quickly with child. The short period of time between the announcement of pregnancy and the wedding, as well as the pace to which the wedding was conducted, led to rumors of Aldrik being conceived out of wedlock at best, illegitimate at worst. The rumors never quite faded as Aldrik’s mother died during childbirth.

Taken back to the South with his father, Aldrik grew up in the palace in the Southern Capital. During his childhood he made close friends with a Western girl, Larel Neiress, who was also a fellow Firebearer in the Tower of Sorcerers. The prince grew into his reputation as a brooding and harsh man, withdrawing from the world and keeping his thoughts close and his enemies in fear.

When he was twenty-two he marched to war with his father, the Emperor Solaris, for the first time, quickly earning the title of “Fire Lord” for his brutality with flame on the battlefield.

Baldair is known as the “Heartbreaker Prince” for his skills with the ladies and he embraces that title. He is quick to put his techniques to work the first time he meets Vhalla Yarl. The prince finds it amusing to work up the library girl with comments and winks in a brief chance meeting before he returns to the Northern war-front. Despite making an impact on her, the meeting is quickly forgotten by the younger prince.

Air Awakens Age: 20
Height: 165cm (5′ 5″)
Birthday: Early Summer (Time of the Mother)
Born in: The South (Rivend, Lyndum)
Eye Color: Blue
Hair Color: Gold
Skin Color: Pale skinned
Build: Wiry, average frame
Favorite Food: Fried Ham
Affinity: Waterrunner
Personality: Cheerful, Excitable, Optimistic, Frazzled
Childhood: Fritznangle Chareem, or Fritz, is the second oldest of five children. The son of a woodcutter, he grew up on the edge of the Southern Forest near the mountains. He lived a happy childhood, but he never quite fit in with his sisters as the smallest of the group. When he Manifested magic at thirteen, he was ecstatic at the idea of joining the Tower of Sorcerers. His family shared his enthusiasm because it would mean Fritz would hopefully learn some control and stop inadvertently freezing things.

Shortly after joining the Tower, Fritz made friends with Larel Neiress and took to managing the sorcerer-only library. He’s often found tending to the books – because no one else will – studying his skills as a Waterrunner, or making eyes at fellow sorcerer Grahm.

Air Awakens Age: 23
Height: 173cm (5′ 8″)
Birthday: Spring (Time of the Dawn)
Born in: The West (Qui, Mhashan)
Eye Color: Dark brown, nearly black
Hair Color: Black
Skin Color: Olive tan
Build: Curvy, well-proportioned
Favorite Food: Candied Lemon Peels
Affinity: Firebearer
Personality: Loyal, Private, Kind
Childhood: Larel Neiress came to the Tower of Sorcerers as a young child to study her magic as a Firebearer. She was a close friend to the prince and functions still as a trusted confidant. At first unsure of fellow Sorcerer, Fritz Chareem, Larel opened up to the cheerful Southerner and began to warm up to her place within the Tower on the whole.

Being from the West, the rift between Sorcerers and Commons often confuses her and she works to bridge the gap whenever she sees it. As a Firebearer she focuses primarily on combat study, but has yet to see any real scuffles.

Air Awakens Age: 19
Height: 170cm (5′ 7″)
Birthday: Spring (Time of the Dawn)
Born in: The South (Oparium, Lyndum)
Eye Color: Blue
Hair Color: Blonde
Skin Color: Olive tan
Build: Average build and frame
Favorite Food: Grilled Trout
Affinity: None, Commons
Personality: Protective, Thoughtful, Faithful
Childhood: Sareem Abban is the only son to Norin’s former master shipbuilder. His father was part of the wedding gift to the Emperor from the West after the Emperor Solaris’s union with the first Empress and moved to the Southern port of Oparium. Sareem’s mother helped to craft sailcloth, which is how his parents met.

Sareem’s father sought out an opportunity for his son at the palace in the Southern capital and Sareem was placed in the library for his cartography knowledge, skills, and penmanship. This was where he met Vhalla Yarl and he was quickly became enamored with her. Confused at how best to display his feelings, Sareem ended up pulling Vhalla into a number of situations the well-mannered girl wouldn’t have gotten into otherwise. However, his intentions remained lost on his friend.