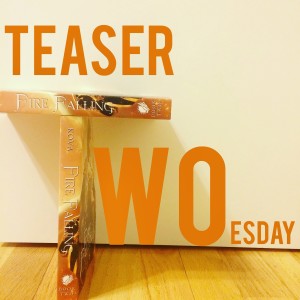 I love #TeaserTuesday. It really gives me a chance to share bits and pieces of my work with the world before it comes out – and we all know how much I hate waiting! This Teaser Tuesday is a play on the word “Two” because… Fire Falling is book TWO of the Air Awakens series. It comes out in TWO days. Teaser TWOesday anyone?!

So, in keeping in line with how I like to share my work I decided to put up the second chapter on the site I got my start… Fictionpress!

Vhalla did not sleep that night. She stayed awake, fighting through the uneasy hours with a book that she quickly realized she’d never finish. Closing it with a soft sigh, Vhalla tucked it away in her wardrobe as the sky began to lighten.

Two large panes of glass acted as both windows and doors, opening to the railed strip of stone that served as her secondary gateway to the world—what would generously be called a balcony. The beginnings of a bad winter flowed into the city at the end of each breeze. Vhalla let the chill numb her cheeks as she watched the edge of the horizon slowly turn crimson with the Mother Sun’s waking.

A knock on her door pulled Vhalla’s attentions inside. Larel had told her that she’d be bringing Vhalla’s armor and helping her clip it on for the first time. Vhalla took a deep breath, trying to muster up the scraps of courage she had scavenged the night before.

The air vanished from her lungs with a soft choking noise at the person who awaited her.

His hair was as black as midnight. His eyes were crafted from piercing darkness and were perched upon high cheekbones carved from flawless alabaster skin. He wore meticulously crafted and finely pressed clothes—not a single stitch out of place. He was the opposite of the haggard woman whose clothes hung more limply with each day. But it was only expected as he was the crown prince.

Vhalla stood helplessly before him, and he seemed just as lost at the sight of her. Neither spoke.

Vhalla realized, very self-consciously, that this was the first time he’d seen her since she cut her hair. Short hair or no, could he even bear the sight of her any longer?

“I have your armor.” His low voice resonated smoothly across her restless mind.

Vhalla heard the demand in the statement, moving aside so he could maneuver a small wooden armor stand into her room.

The sound of the door shutting behind him sent a nervous shiver up her spine. The last time Vhalla had been alone with the prince was the day of her verdict. The last time she’d seen him she was being escorted out of a courtroom by two armed guards, her sentence having been read—a sentence that gave the prince the ability to kill her should she disobey.

But Aldrik wouldn’t kill her. The way he looked at her revealed that certainty. He couldn’t kill her, if the magical force—the Bond—between them was real.

“Where’s Larel?” Vhalla wanted to smash her face against the wall. That was what she decided to say?

“I thought I might help you.” It was awkward, everything between them felt awkward. It was as though five years, not five days, had passed.

“I can’t deny you, my prince.” Vhalla brought her hands together, fidgeting.

Instead of his usual scolding of her restless tic, the prince took her fingers in his.

“Why the formality?” he asked softly, slipping the gloves onto her hands.

“Just Aldrik is fine,” the prince reminded her.

She nodded mutely, still working through the knot of syllables behind her lips. With both gloves on, Aldrik passed her a chainmail tunic. Its sleeves were full, extending to the top of her gloves. Vhalla was surprised to find it had a hood fashioned of tiny links. Her hair fell just above where it pooled at the back of her neck.

The weight of his stare brought her eyes to his, and Vhalla’s hand fell from where it played with the ends of her hair.

“You had it cut.” His hands paused on the armor.

“I cut it,” she corrected, staring at a corner of the room. It felt as though she was on trial all over again.