A princess on the run with enemies on all sides…

Vi Solaris is on the eve of getting everything she’s ever wanted—her family, her home, her throne—and to save the world she’s going to have to give it all up.

The Empire sees her as their Crown Princess, returning at long last. But Vi only sees visions of fate guiding her to the world’s gruesome end. Across the sea is a man who holds the keys to deciphering her premonitions and thwarting the ancient evil ravaging their world. But to get to him, Vi will have to contend with enemies of the crown, romance she didn’t expect, sorcerer pirates, and a betrayal she never saw coming.

Return to Solaris in the second book of Air Awakens: Vortex Chronicles, a young adult epic fantasy filled with even more magic, adventure, and romance. Get ready for twists you never saw coming that will keep you up all night reading! 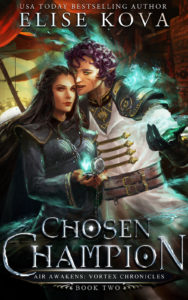 The Crossroads were unlike anything she’d ever seen. Certainly, the treetop cities of the North were magical and breathtaking in their own right, but the West was its own unique form of magic.

Canvas shades were pulled over the alleyways and streets to guard those below from the sun. The filtered light illuminated the white of the road ahead in reds and oranges. But the streets were mostly empty. Only a few lined their path forward, regarding them tiredly. Perhaps even warily.

Her eyes scanned over their heads, to the buildings behind them. Mostly squat and constructed of a smooth stone that looked almost like the sand itself, they had square windows and ashen timbers jutting out between floors.

Vi’s attention settled on the doors. Painted in a rough hand over a few was a white circle. Others bore an X.

“The White Death,” she muttered. She’d seen a similar mark in the North.

“Slightly different from the Northerners. Here, the circle marks places where the afflicted live… the X marks somewhere with a confirmed death. They haven’t set up any kind of central clinic,” Jayme said solemnly from Vi’s side. “When I came through a few months ago, I don’t recall seeing half as many marks.”

“The plague has hit the West the hardest so far,” Romulin agreed. His tone just as grim. “This is a better turnout than we had on our way up, if you can believe it. Though they look even less happy to see us…”

“How many the West has lost? Or how many have turned out to greet us?”

“Elecia will have more up-to-date numbers… last I heard, it was in the range of twenty thousand.”

Vi gripped her reins so tightly the horse’s head jerked sideways. She hastily loosened her fingers and gave her mount an apologetic pat.

“There must be a cure.” Vi turned to Romulin, giving him a hard stare. His eyes darted between her and the people. She was putting him on the spot, confronting the harsh reality of their circumstances, but she didn’t care.

“If only,” Andru said softly. “I think hope of one passed with our Late Emperor.”

It was a large square, lined with buildings easily three floors higher than the rest. Every building seemed to be more ostentatious than the last, as if in a competition for which could be the highest, or have the most windows, balconies, or adornments. If Vi had to pick a winner, it would be the one toward her right, straight behind a platform in the center of the square. The building had three large, circular, stained-glass windows stacked on each other. Vi could only imagine how much it must have cost for an architect to conceive.

At the center of the square where the two main roads of the Empire met—the Great Southern Road and East-West Way—was a blazing sun in gold, cardinal directions pointing out toward each of the four departure points from the square.

The square was more filled with people than the road had been. Civilians stood to meet the approaching party, though it did not feel like a greeting. It felt more like a squaring off. They regarded the Imperial parade with shadowed eyes and slumped shoulders.

Surrounding them at the edge of the square was another small army, outfitted in Western crimson. They had been brought by the Lady of the West, who stood on a large platform in the center of the square, clad in black armor trimmed in red. Elecia had her hair undone, corkscrew curls standing in all directions like a crown that encircled her whole face. It was not unlike how Ellene had worn her hair, and Vi’s heart ached at the comparison.

“It is my honor,” Elecia’s voice boomed over the square, “to welcome her highness, Vi Solaris, on her historical march home.”

“Liberate us!” a woman screamed at Vi, lunging against the line of soldiers. “Liberate yourself and us from the tyranny of Solaris, reclaim your Ci’Dan name!”

Vi kept her eyes forward, focused solely on Elecia. She remembered the incident with the man during the solstice. As soon as chaos gained a foothold, there was no room left for reason.

“It is my honor to return to the home of my forefathers,” Vi proclaimed, trying to speak over the growing whispers. “On my path home to Solarin.”

“That is not your home!” a man shouted.

“Not your home!” The chant was picked up by the crowd.

Vi contained a bitter smile. They were right. She had no home, and she never would.

“The sooner we can end this, sister…” Romulin whispered, looking warily at those gathered. The crowd was beginning to shift, growing tenser by the moment.

Vi dismounted and guards pushed through the crowd ahead of her, creating a path to the platform. Jayme remained glued to her side, directing the other soldiers with waves of her left hand, her right on the hilt of her sword. The people forced themselves against the guards, trying to reach her. Jayme stepped in front whenever one stretched a hand too close.

Vi looked at their harrowed and strained expressions. These were not subjects looking to their sovereign in delight—but a people demanding answers from the party they deemed responsible for immense troubles.

“Lead the West to its former glory!”

She made it to the stairs, and had one foot on the bottom step when a shout stole her attention.

“They say Adela knows the cure! She killed Emperor Solaris for it. She’ll sell it back to us, at a price. Is it true?”

Vi quickly finished her way up the stairs.

“Her future Empress and I shall be discussing matters of the White Death, as we know—” Elecia attempted to speak over the growing unrest.

“Remove the Easterner—” A voice seemed to echo off every building, booming over every other, silencing the masses. “And let Ci’Dan rule once more!”

A glint of light caught Vi’s eye from a rooftop. Vi jerked her head in the direction, squinting against the sun. An archer.

“Mother! The roof—” Vi didn’t get to finish, but luckily she’d said enough.

Her mother swept a hand upward even before her head turned. Wind gusted upward all around her, ripping a pennon from its flagpole. The fabric fluttered through the air, tangling with the arrow that had been blown off-course along with it.

As if the assassination attempt were a cue, the mayhem began.