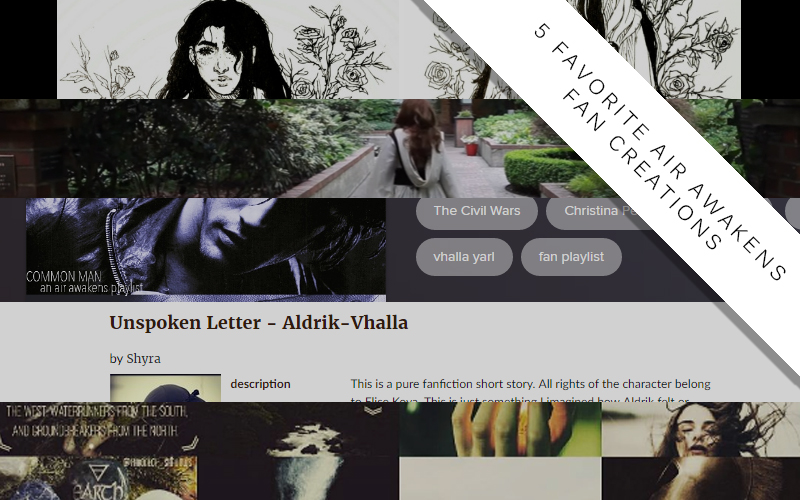 Fan creations… for an author, there’s basically nothing better. It’s affirmation that something about your work resonated with those that consumed it. It’s an astounding feeling to know that something you made has touched someone else to the point that they themselves were compelled to create.

I pulled out five fan creations I’ve come across during publishing to highlight. By no means is this an exhaustive list. It’s merely a list of some of my favorites. But, really, I love everything anyone makes for Air Awakens!

This was one of the first Air Awakens fan art I came across, and it was a total WOAH moment. Furthermore, I love the way Waricka portrays Vhalla. Disheveled, hidden by everything around her. Her hair half hides her face, her robes dwarf her, even the book she’s holding is half her size. I imagine Vhalla in Air Awakens to start out as this small person who is more a canvas for the world around her than her own fully realized person. Of course, throughout the book, this changes, and I’d love to see how Waricka may portray Vhalla by the end of the series!

2) A super original cosplay video by Vandorwolf on YouTube

I’ve done quite a few cosplay in my day, and I know how hard it is to do. To see that someone spent the time to make an Air Awakens cosplay, never the less a Vhalla cosplay, is amazing by itself. But, to then make a short cosplay video to one of my all time Vhaldrik songs? This was too much for me and completely made my day, week, month, year, when I saw it.

I won’t lie, I’ve taken glances here and there to see if there was any Air Awakens fanfiction on the net. I never expected it to find me. Shyra contacted me over Facebook and with her blessing I’ve shared her little fanfiction everywhere. I love to see how people interpret and make my characters their own, what readers think is going through the heads of each our beloved characters, how they would rewrite different things.

My name is Aldrik and I am the prince of fire.
I am the image of a man who has lost everything. I am the reflection of a broken soul and my flames are my cries of anguish. My anger and hurt fuels the flames as they build wall around me, higher and higher… Read more on Goodreads

Irishsassenach describes the playlist as a “self indulgent playlist for Air Awakens by Elise Kova.” I have indulged in this! I’m not sure if it’s intentional or not, but half the songs are on MY Air Awakens playlists that I wrote to. The other half? Well, let’s just say they’ve been added. Also, that album cover (that I think irishsassenach made???) is too cool!

a common man from irishsassenach on 8tracks Radio.

5) All these Air Awakens photo edits by throneof_shadows

Confession time, I low key stalk throneof_shadows on Instagram because I love all the Air Awakens photo edits! The photos are on point and the text is fantastically done. Photo edits are one of my favorite fan creations because I think they’re pretty accessible for anyone to make and adds really stunning visuals to the greater fan world surrounding the book.

These are just a few of my favorites… But, really, I LOVE ALL FAN CREATIONS. I tried to highlight five here, but every fan art, playlist, photo edit, writing, everything created about the Air Awakens world has such a special place in my heart. So thank you to everyone who’s ever made one and contributed to this amazing community by doing so!