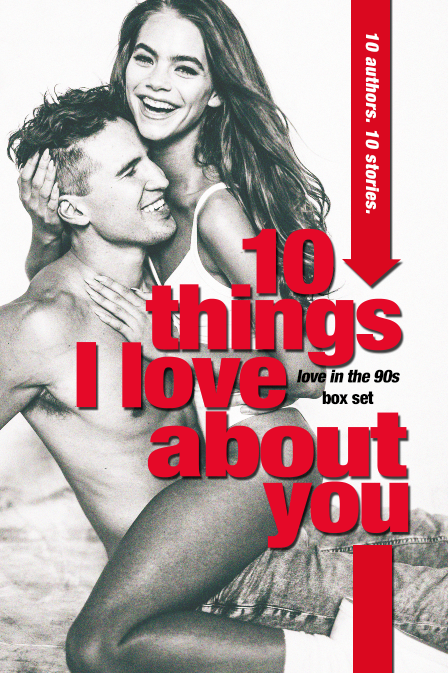 The 90s: The decade of AOL, Grunge music, the Gulf War, OJ Simpson trial, Friends, Seinfeld, Britney and Christina, tattoos and belly button piercings, Monica Lewinsky, Buffy the Vampire Slayer, and Tarantino movies. It was a decade of polarities and hilarity.

Those who reached adulthood in the Nineties were branded Generation X, and were labeled apathetic slackers and cynics. But, ultimately, this generation was called on to bridge the gap between old ideals and new technologies and ways of living.

These new adults had to find jobs, find themselves, and find love amidst rapidly changing landscapes online and off.

TEN THINGS I LOVE ABOUT YOU is a collection of ten contemporary romance, new adult, stand-alone stories set in the 1990s.

The title of each love story will be a hit song from the year that the novella represents, and are written, respectively, by award-winning and bestselling authors.

1990: “Nothing Compares 2 U” — Michele G Miller + Mindy Hayes
Can one weekend erase a first love’s betrayal?

1991: “More Than Words” — Christina Benjamin
It takes more than words to make it in love and music.

1993: “Can’t Help Falling in Love” — L.A. Fiore
Emma doesn’t put much stock in fairy tales and happily ever afters, but finding herself stranded in some unknown town, in a diner late at night, dripping cheeseburger juice on her wedding gown is so not how she saw her big day ending. But when the town’s sexy mechanic comes riding to her rescue, maybe her fairy godmother is onto something.

1997: “Lovefool” — Katie M John
When Vicky Dean finds herself drowning in the ocean of cool that is the London indie music scene, she soon learns that if she’s to survive, it’s time to change the record.

1999: “Genie in a Bottle” — Elise Kova
When high school senior Erin Williams discovers that an N64 game she picked up at a yard sale contains a real (and really hot) genie, she gains three wishes and a much-needed confidant. However, the final wish may cost her more than she wants to give.

** A percentage of sales goes to the National Kidney Foundation **